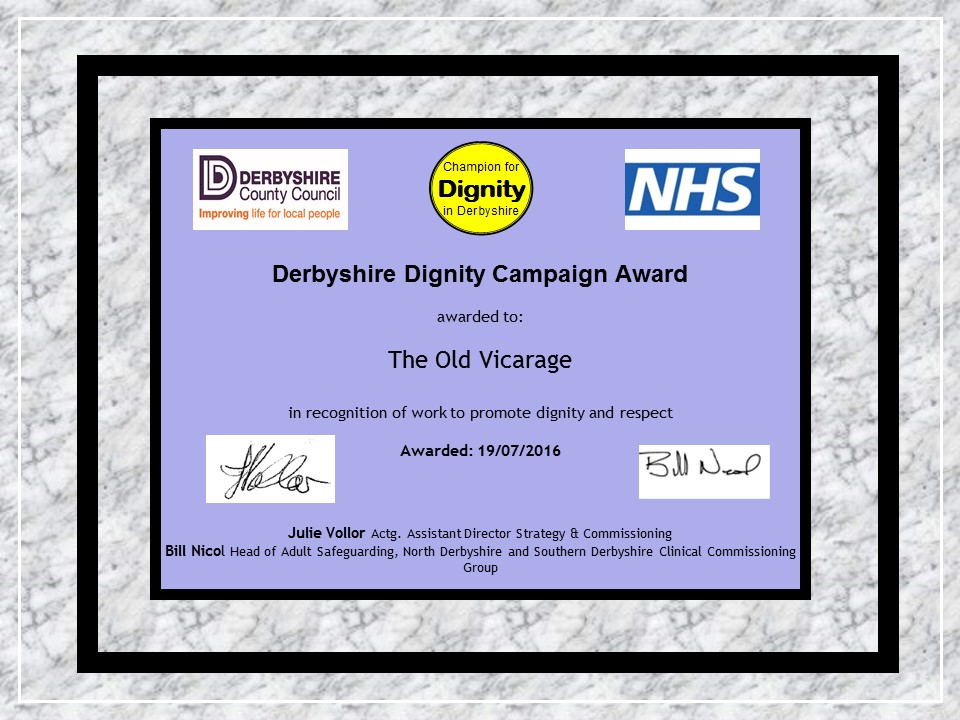 The Old Vicarage care home in Clay Cross, near Chesterfield, has been presented with an award to recognise its commitment to promoting dignity and showing respect to its residents.

The Stretton Road home has earned the Derbyshire Dignity Award for ensuring people have a good experience of care when they need it as part of Derbyshire County Council’s Dignity in Care campaign.

To qualify for the award – a joint initiative between the council’s Adult Care services and Derbyshire NHS – the home had to demonstrate that it had a zero tolerance of all forms of abuse, supported people and treated them as individuals by offering support with the same respect they would want for themselves or their family, and enabled people to maintain the maximum level of independence, choice and control.

Other satisfied criteria of the campaign’s 10-point dignity challenge included listening and supporting people to express their needs and wants, respecting people’s right to privacy, ensuring people feel able to complain without fear of retribution and acting to alleviate people’s loneliness and isolation.

Home manager Karen Betts said the award, launched nationally by the Department of Health in 2006 as part of the Dignity in Care campaign, was testament to the team’s overall approach.

“People are not always aware of the good work going on within the care sector and we are thrilled to be recognised as an ambassador for putting dignity at the heart of services that care for older people,” she said. “We will continue to go the extra mile to ensure residents feel valued and respected.”

For more information on the Derbyshire Dignity Award, visit www.derbyshire.gov.uk/social_health/care_and_health_service_providers/dignity_respect/dignity_award/default.asphow