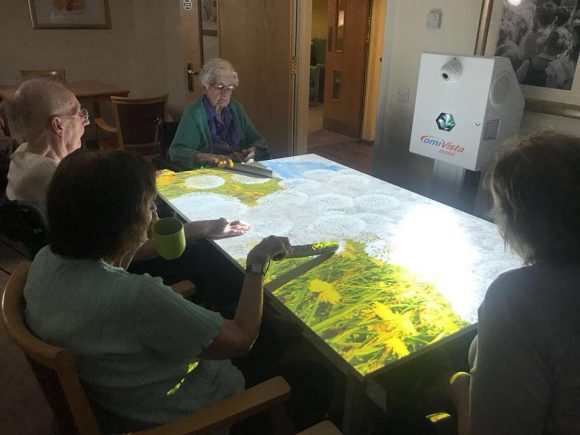 Age is once again proving no barrier when it comes to residents getting their game on with new gaming-style equipment at Kiwi, Moat and Chetwynd House.

“Gaming is not just for young ones! I’ve been making fun shapes and had quite a giggle playing the ‘chase’ game. I forgot how competitive I can be!” Joan Perry, 87 year old gamer from Kiwi House.

Joan from Kiwi House has been ‘gaming’ along with residents from other homes, thanks to a new sensory-based game designed to stimulate movement and interaction.

The game is a light-based technology called ‘Tovertafel’. Developed by dementia experts, the interactive and sensory-based games stimulate physical and cognitive activity and encourage social interaction.
“The tovertafel has proved an instant hit with our residents and our team. It’s very simple to use and the games are projected onto any suitable table making it accessible for everyone to enjoy. Because the colourful objects respond to hand and arm movements, residents get to play with the light itself which is fantastic for their movement. The main thing of course, is that residents are having fun and proving gaming is for all, young and old!” Dave Godrich, Kiwi House Manager